Over the past few years, LED TVs have grown to impressively large sizes. Even so, projectors remain the best way to get the largest image possible at the lowest cost. The possibilities are almost limitless in how large of an image you can display because projectors can be combined and edge-blended to stretch an image to any size.

The Battle of the Bulb

Ongoing maintenance on projectors has been one of the dreaded drawbacks to projection ownership. With regular use, lamp and filter replacements can be costly over the life of the projector. Another common issue is that when compared to LED displays, the overall image from a projector is not as bright and therefore lights must usually be dimmed to view the image more clearly. Steady image degradation is also an issue as the lamp dims over its rated life before it finally goes out.

These lamps also seem to go out in the most inopportune time…during that all-important Board meeting or during training with 50+ people gathered around. At last, projection technology has taken a welcomed leap forward with laser-based light engines to address these common issues. 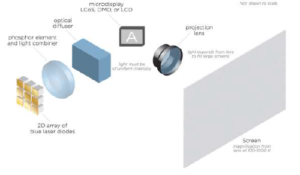 Two primary technologies have led the way for laser projector advancements – RGB and Phosphorus laser light engines. The RBG laser technology emits three distinct red, green, and blue lasers and provides the brightest, best color image and longevity. However, because of the higher cost, this technology is normally used in high-end applications like cinemas, auditoriums, or outdoor projection mapping light shows. The Phosphorus-laser light module is the most cost-effective way to provide a long-life-laserlight engine. With Phosphorus laser technology, cheaper blue lasers are used to excite a phosphorous element to generate a full-spectrum white light – which advanced optics then split into independent red, green and blue light sources that are then used to create the desired projected image. This technology is normally utilized in smaller projectors for use in corporate, government or educational settings. As this technology improves, it is slowly creeping up into the higher-end applications.

Most of us have been to meetings where before a presentation can start, the lights are turned off (or at least dimmed), shades are closed, and then the presentation could begin so everyone could see the image. Laser projectors deliver a brighter and wider color gamut so images are truer to color than traditional projectors and very close to LED display images. If the space has a lot of natural light, laser projectors can still be utilized and show a much more vibrant image in natural light than lamp projectors (although still not as good as LED display).

The other major benefit to laser technology is that brightness and color decays much more slowly than regular lamp projectors, so the image stays uniformly vivid and sharp for a much longer period of time. This is of greatest benefit if the technology is utilized in digital signage, graphics design, or other areas that require vivid, sharp color display in a large image for many hours during a day. Brighter color and wider color gamut means truer color of the image. 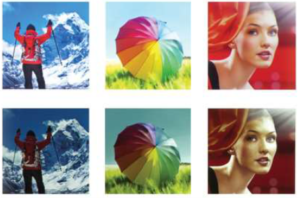 The typical lifespan of a laser projector is 20,000 hours, as opposed to the typical lamp projector life of 2000 hours. If the laser projector is used 8 hours per day in a corporate or classroom environment, it will last over 9 years. That is 7 years longer than a typical singe lamp usage. There are no lamps to replace in those 9+ years!

Projection technology works by creating light, and that light is manipulated to create an image on the screen.

The lamp projector uses intense heat to create white light. Once the white light is created, the projector has to now absorb or block much of this light to leave red, green, and blue light to form the image. It then projects that image on a projection screen. This makes the technology less efficient and increases energy consumption. Lamps inherently put out a lot of heat, which results in increased power consumption and inefficiency. RGB Laser technology only creates the exact colors needed for the image, instead of white light that must be reduced to red, green and blue. Because, these laser light engines create exactly the colors that are needed, they can use less power to create the equivalent amount of brightness.

The phosphorus-laser technology is a hybrid of these two technologies, in which efficient laser light sources are used to excite a phosphorus element to produce white light, which can then use the traditional color splitting and recombining techniques to create the projected image. Because this hybrid system uses solid state lasers to generate the light, they also provide longer life and lower power utilization than the traditional lamp projectors.

The other big drawback to lamp projectors is the time to turn on and turn off. So, back to the meeting where the shades are closed, the lights are dimmed or off, and now everyone must also endure the wait while the projector heats up and the image comes into view. This wastes valuable time and efficiency in running a meeting. Laser projectors do not have this issue. When powering up or down, laser projectors are nearly instant. This gives an experience similar to an LED display being turned on or off.

We’ve all been warned not to shine a laser in someone’s eye. So, is laser technology safe? How is it different from shining a laser into someone’s eye? Well, it’s because the technology in hybrid laser projectors does not really work by shining a direct laser light onto the screen. The laser passes onto a phosphorus/optical diffuser, which than converts the colors to the image needed and then projects that image onto the screen through a lens. Similarly, the RGB laser technology passes the lasers through a series of optical elements to spread the energy uniformly over a wide area before projecting it to the screen. In either case, by the time the laser light leaves the projector, it is no longer collimated and does not emit the dangerous levels of energy found in raw laser light. The Laser Illuminated Projector Association (LIPA, lipainfo.org) has conducted technical measurements and studies and been working with the FDA to appropriately classify laser projectors in the same class as lamp technology projectors. According to LIPA studies, “laser projectors pose no more threat to eyes than regular lamps projectors.” That being said, no one should be staring into a projector, laser or lamp, for a prolonged period of time.

What Are The Drawbacks to Laser Projectors?

Perhaps the biggest drawback to laser projectors is the cost for the laser module replacement or repair, which could cost thousands of dollars. To mitigate this cost, you can purchase the three to five year extended warranty for the projector, which costs a fraction of the replacement/repair cost. We have already discussed the higher initial cost, when compared to traditional lamp projectors. However, as the technology improves and adoption rates increase, the costs will continue to come down, as we have been observing over the past year.

So…Are Laser Projectors Worth the Investment?

Laser projector technology is the future as pricing and total cost of ownership becomes more competitive with lamp based projectors. The images provide higher color gamut and vibrancy and the need for frequent maintenance is eliminated. Laser projectors are really geared towards organizations that need higher reliability and performance for their meeting or classroom spaces.